Introduction: Post-implantation syndrome (PIS) is characterized by fever, flu-like symptoms, leukocytosis and elevation of reactive C protein in the postoperative period of EVAR. The authors aim to estimate the incidence of PIS after EVAR in their institution, identify risk factors and determine the association with clinical events.

Materials and Methods: A retrospective study was designed at a tertiary center. All patients undergoing EVAR between July 2014 and December 2016 were included. Data were collected through electronic clinical records, as leukogram, reactive C protein and body temperature. The primary endpoint evaluated was the incidence of PIS, defined as fever> 38 ° and reactive C protein > 75mg / L. The association with demographic and procedural characteristics, length of hospitalization and perioperative clinical events (death or major complications) was assessed.

Results: 205 patients were identified in this period. After analysis of the clinical records, 25 patients were excluded due to the use of branched or fenestrated endografts; 11 patients were excluded due to EVAS; in 17 patients, the indication wasn’t a primary aneurysm or it was a mycotic aneurysm and; in 46 patients the time of surgery wasn’t elective. In the remaining 106 patients, the incidence of PIS was 19% (n = 20). A statistically significant association was found between PIS and smoking (p = 0.005), COPD (p = 0.005) and statin therapy (p = 0.031). The multivariate logistic regression analysis, correcting for smoking and statin therapy, revealed that smoking is an important risk factor (OR 7.26, p = 0.03) and statin therapy a protective factor (OR = 0.341, p = 0.049). Regarding for the characteristics of the procedure, percutaneous approach, amount of contrast, intraoperative complications and need for complementary procedures, no differences were observed. A significant difference was found between groups in hospitalization length, with a median of 5 days in the group without PIS and 7 days in the PIS group (p = 0.034). No significant differences were found in cardiovascular events, complications or death within 30 days postoperatively between the groups.

Conclusion: The incidence of PIS was 19%, which is concordant with literature. The results suggest that smoking is a risk factor. There was also an increase in hospitalization length in 2 days in PIS group. Statin therapy at the time of surgery is a modifiable factor that has been shown to be protective with respect to PIS, reinforcing the benefit of this therapy in the perioperative period of AAA patients. 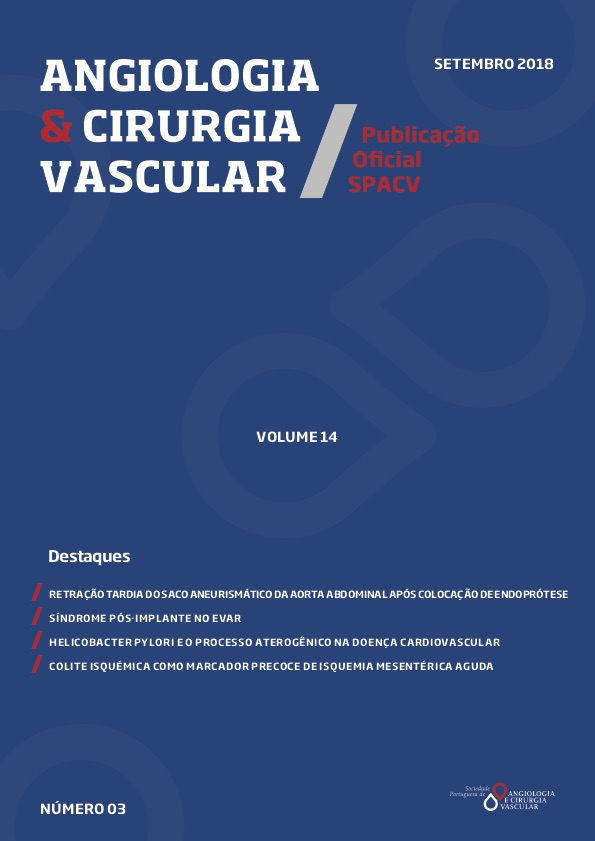