PLANNING, EVAR AND FOLLOWUP WITHOUT CONTRAST IN CHRONIC KIDNEY DISEASE

Introduction: Up to 30% of patients undergoing elective EVAR have prior Chronic Kidney Disease (CKD). The contrast-induced nephropathy is a complication of EVAR. It is possible to perform EVAR without contrast or minimize its amount during the procedure, using intraoperative angiography with CO2 and/or IVUS instead of conventional angiography. However, these techniques are not available in most hospitals, unlike Dupplex ultrasound (DUS). In patients with favorable biotype and performed by an experienced professional, DUS allows the detection of endoleaks and confirms patency of the renal and hypogastric arteries during EVAR.

Objectives: show the feasibility of planning, execution and follow-up of EVAR without contrast through the presentation of the technique used in a clinical case.

Case Report: A 70-year-old man with a history of CKD due to IgA nephropathy, presented in our hospital with a 57mm asymptomatic infrarenal aortic aneurysm diagnosed on a non-contrast CT. As the patient had risk factors for contrast induced nephropathy, a favorable anatomy and a good biotype for abdominal DUS, he was proposed for EVAR. Planning was performed using centre-lumen line reconstruction and outer-to-outer measurements on non-contrast CT. Proximal neck thrombus, lumen diameter and iliac patency were evaluated by DUS. During surgery the left (lowermost) renal artery was cannulated under fluoroscopy and confirmed by DUS, and a hydrophilic guidewire was left as reference. The main body (Gore Excluder®) was advanced and subsequently deployed under DUS monitoring. Afterwards, both hypogastric arteries were cannulated and used as reference for bilateral extension. A final DUS excluded type 1 or 3 endoleaks. Before discharge he underwent DUS and non-contrast CT which demonstrated the adequate positioning of the endoprosthesis just below the lowermost renal artery, and renal and hypogastric artery permeability. There was no change in renal function during hospitalization.

Conclusion: The planning, execution and and follow-up of EVAR are feasible without contrast. This technique is justified in cases with high risk for contrast-induced nephropathy in patients with a favorable biotype for abdominal ultrasound and a favorable anatomy for EVAR. 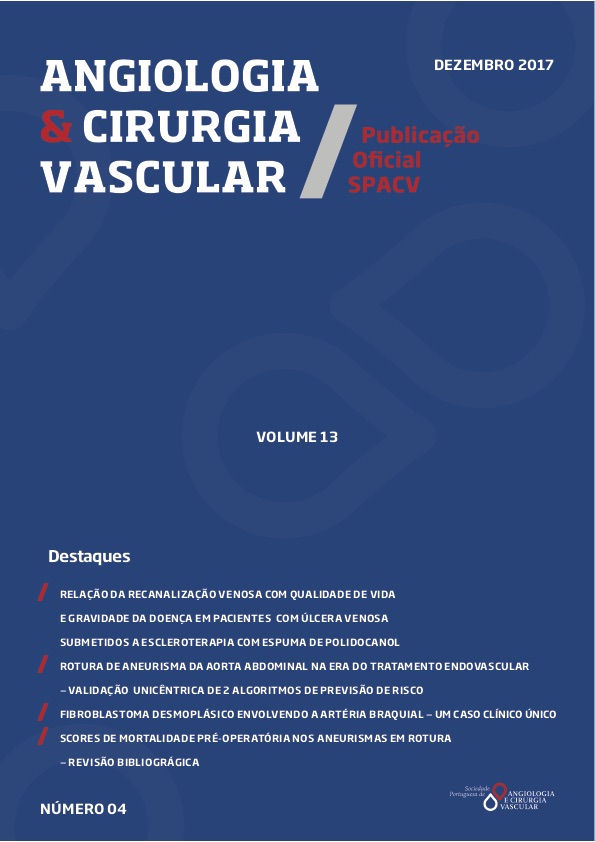